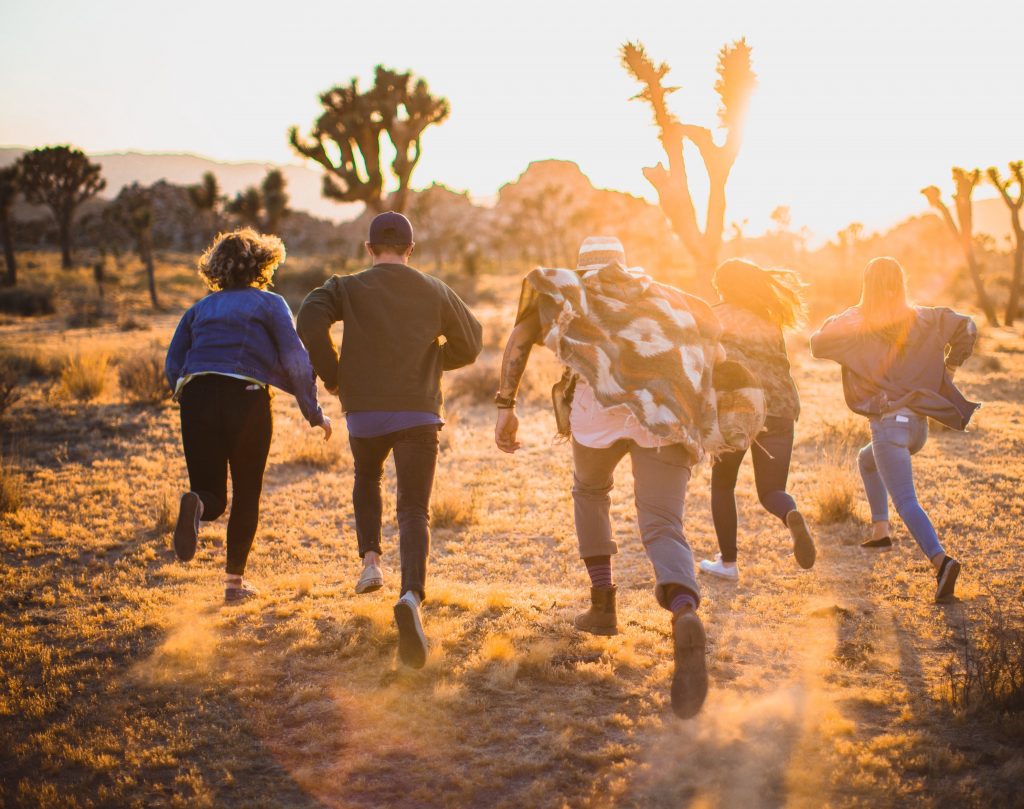 “Just like downing a powerful caffeine drink, “reaching out to others” pays that big “life energizer dividend!”  Wes Adamson

In the midst of the quarantine, I read an article about French philosophical workshops for kids and teens. These workshops aim to encourage kids and teens to think and talk about big ideas such as Freedom, Love and Courage.

I decided to replicate this concept, but wanted to add a more cross-cultural dimension – and thus interviewed 3 groups of 12-18 year olds raised in Germany, Spain, France, England and America. Specifically, I asked them for their views on happiness and asked them if their ideas on happiness had changed post Covid-19. I was surprised to learn some deep insights about Relational Intelligence.

Echoing Goleman’s statement, Gina and Carlos, two interviewees, argued, “all humans are social creatures that need to know that someone is there if we need them. It’s scary to feel alone”. Assuming that we share this assertion, it follows that human connections are as essential at home as at work. Feeling disconnected from others (even by choice) erases the chance of feeling valuable, recognized and meaningful, three states that most humans work towards at home and at work.

Besides corroborating expert opinions on social and relational intelligence, the groups of teens taught me three lessons about relationships;

1-You don’t need others to be happy, but establishing connections will always enrich your life.

If you are self-reliant, you are naturally not very trusting; you believe that you can only rely on yourself, only you can do the job properly and if you have a problem – you need to figure it out for yourself. You will be suspicious that people who want to connect with you have hidden motives.

If you are loyal and interdependent then, you believe that you will always find someone who could help you when you are stuck, but it’s also your responsibility to help others. You are likely to be trusting and welcome others in your life.

Ana and Cléa, two of our interviewee agreed with this dichotomy, “knowing if you need others or not in your life in order to be happy is a question of personality; if you enjoy being alone and feel independent (then you don’t need others to be happy) but if you care about other people’s opinions, then you feel stuck in quarantine.” However, a third interviewee guided them towards a much more nuanced conclusion they all agreed upon, “whatever your personality type, reaching out to make a connection will add to your life.”

This seemed like a powerful insight that could benefit people defining themselves as “self-sufficient” to know that connecting to others could improve their life. A new and unexpected connection could lead to the discovery of a new talent or interest previously ignored.

Daniel Goleman mentioned that a mutual gaze can release dopamine – the happy hormone. Sofia, a 12 year old interviewee pointed out that an exchange of smiles can also trigger immediate connection. Cléa, Nomi, Alberto, Felix, Carlos, Julia and Ana insisted that hugs or back rubs can also transmit the care, trust, respect and recognition that are fundamental pillars in relationship building as also confirmed by Esther Perel.

Being physically close to someone makes us feel more connected to this person. This could be because, as Daniel Goleman explained, when you can see the entire body of the other person (rather than only seeing the upper body when you are online), it’s easier for our neurons to mirror each other. The neuroscientist David Linden adds that the “principal function of interpersonal touch (a hug or back rub) is to build trust and cooperation. It’s the ability to strengthen a bond and communicate, I’m on your side. I’m an ally. You can trust me.”

As Carlos underlines in the interview, interpersonal touch is more socially accepted in some cultures than others, but in cultures that are touch-adverse (for example, the United Kingdom or Sweden), it remains important to be aware of the power of a light touch in establishing trust and collaboration.

3- It’s a privilege to have people in your life and your duty to maintain the connection.

“Don’t seek them out or work hard to create them (connections with others). Look around you and reach out. It’s not difficult to do, but so easy to ignore”, said Nomi, one of the interviewees. In this day and age where we see a generation of teens collecting “likes” from people they don’t know or don’t even like, this pearl of wisdom felt like an offering and a good lesson for all the adults (including myself) who shouldn’t generalise the habits of an entire generation.

So, looking around, take in the person sitting next to you – whether at school, work or your neighbour – and make contact. This awareness could be the first step in the process of acquiring relational intelligence.

We often think that “making connections” is up to us, that it requires hard work, and follows strict rules. This article gives a list of steps required to connect with someone, including; going on an adventure, remembering to be positive and always asking open questions.

For the teens interviewed, establishing a connection with someone else doesn’t require an imposed structure. They don’t overthink it. For them, it’s a privilege “to have people in their life.” They feel “grateful when they find nice people who care for them.” Unlike what the article says, these teens don’t think it’s up to them to “build” a connection, they rather perceive it as a two-way process where the connection is built by both parties, not just one.  However, once the friendship is established, the teens agree that it is their responsibility to make an effort to maintain it.

Many self-conscious adults don’t dare to reach out to others for fear of rejection. As Goleman explained, often adults see others as a threat. This perception activates their amygdala within the right part of the brain that triggers a fight-flight or freeze mode. Maybe we could learn from Sofia and Ines, two twelve years old who define happiness as “a chance to play and have fun with others”. In their case, reaching out to others activates the left part of the brain responsible for feeling energised, enthusiastic and hopeful.

For me, this nonchalant attitude exposes 4 stages of behaviour:

1- Noticing who is sitting around you

2- Wanting to make a connection (desire to meet someone new)

4- Liking it (seeing this interaction as a privilege)

These 4 stages are described by James Clear, the author of Atomic Habits, as the 4 stages of habit formation. He explains that “the actions you take provide evidence for who you are or who you want to become”.

Listening to a dozen teens ranging in ages from 12 to 18 has made me realise that relational intelligence doesn’t have to be taught, it can be intuitive. As Daniel Goleman and Gina both said “we are social creatures” and we instinctively know what we should do to connect with others. However, the rise of expectations can cripple us with fear of rejection. This fear prevents us from spontaneously connecting to others.  Maybe it’s time to listen to the next generation and learn to reconnect with our primal instincts.

Here is the link to the edited teens video.